Lack of Sleep May Lead to Brain Shrinkage

Lack of Sleep May Lead to Brain Shrinkage

Recent studies show poor sleeping habits cause both brain damage and brain shrinkage, and may even accelerate onset of Alzheimer’s disease.1

Previous research published in the journal Science2 revealed that your brain removes toxic waste during sleep through what has been dubbed “the glymphatic system.”3, 4, 5

This system becomes active during sleep, thereby allowing your brain to clear out toxins and harmful proteins.

Sleep is also necessary for maintaining metabolic homeostasis in your brain.6, 7, 8 Without sufficient sleep, your neurons will actually begin to deteriorate—and catching up on sleep during weekends will not prevent this damage.

Lack of sleep has also been linked to obesity in both animals and humans, as well as hormone alterations in animals. In short, sleeping soundly appears to be key for aging well, and maintaining healthy brain function into old age.

According to recent research published in the journal Neurology,9, 10, 11 lack of sleep may affect the size of your brain. A total of 147 adult volunteers underwent MRI scans to assess the link between sleep and brain volume.

As it turns out, sleep problems like insomnia can have a distinct impact on your brain over time, causing it to shrink—and shrink more rapidly, compared to those who sleep well. This effect was particularly significant in those over 60. According to the authors:

“Poor sleep quality was associated with reduced volume within the right superior frontal cortex in cross-sectional analyses, and an increased rate of atrophy within widespread frontal, temporal, and parietal regions in longitudinal analyses.

Results were largely driven by correlations within adults over the age of 60, and could not be explained by variation in physical activity, BMI, or blood pressure.”

The Importance of Staying in Sync with Nature

Maintaining a natural rhythm of exposure to sunlight during the day and darkness at night is one crucial foundational component of sleeping well.

This was addressed in a previous interview with Dan Pardi, a researcher who works with the Behavioral Sciences Department at Stanford University and the Departments of Neurology and Endocrinology at Leiden University in the Netherlands.

Exposure to bright daylight serves as the major synchronizer of your master clock—a group of cells in your brain called the suprachiasmatic nuclei (SCN). These nuclei synchronize to the light-dark cycle of your environment when light enters your eye.

You also have other biological clocks throughout your body, and those clocks subsequently synchronize to your master clock. One reason why so many people get so little sleep, and/or such poor sleep, can be traced back to a master clock disruption.

In short, most people spend their days indoors, shielded from bright daylight, and then spend their evenings in too-bright artificial light. As a result, their body clocks get out of sync with the natural rhythm of daylight and nighttime darkness.

This, it turns out, may have more far-reaching ramifications than previously thought, and humans are not the only ones affected by artificial lighting brightening up the night.

For example, researchers investigating incidences of birds singing in the middle of the night believe that bird behavior is being adversely affected by artificial lighting from street lamps and city lights.

One animal study13 found that chronic exposure to light at night prevented reproductive organ development in male blackbirds. Their sex organs developed naturally during the first year, but in the second year of nighttime light exposure, the development stopped altogether.

Birds aren’t the only species suffering from light pollution. As noted in the featured article:14

“In the wild, light pollution causes hatchling sea turtles to lose their way from beach to the ocean, and disorients Monarch butterflies searching for migration routes.

More recently, researchers have documented an earlier dawn chorus, which influences mate selection, feeding and interplay among species. At a deeper, molecular level, the changes in birds’ hormones raise questions about their reproductive fitness and the potential for ecological and evolutionary consequences.”

The researchers call for collaboration between scientists and policy makers to limit the impact of light pollution on animals and ecosystems. It’s easy to make the case that humans need to limit light pollution as well, in order to thrive…

If you’re overweight and/or exhausted much of the time, chances are high that poor sleep patterns—perhaps resulting from too many light-emitting gadgets—are at play. The exposure to excessive amounts of light at night, courtesy of electric light bulbs and electronic gadgets of all kinds, makes it exceedingly difficult for your body and brain to wind down for sleep. And this lack of sleep can lead to metabolic dysfunction. Poor sleep has actually been implicated in obesity in a number of previous studies.

Most recently, scientists at the University of Manchester15 concluded that your body clock plays an important role in chronic inflammation and the accumulation of body fat. According to the University, the team’s findings “are helping develop new ways of treating obesity and the fatal diseases linked to being overweight.” According to lead researcher Professor David Ray:

“Essentially we discovered that the circadian clock protein REVERB plays an important role in the safe accumulation of body fat. Usually as fat accumulates there is inflammation in the body which leads to diabetes and heart disease. Our research shows that this process is linked to the body clock.”

The protein REVERB, which is linked to your body clock, not only regulates adinopectin—a hormone produced in body fat—but it’s also a master regulator of inflammation. They discovered that mice lacking this REVERB protein were able to accumulate more fat without the associated inflammation. According to Professor Ray:

“Our work demonstrates that it could be possible to switch unhealthy fat to a healthier form by tapping into one of the elements which we discovered. We hope that would mean fewer obese people go on to develop more severe metabolic complications such as type 2 diabetes and heart disease… Our analysis showed that in morbidly obese people who have undergone weight loss surgery the same pathway from the body clock to inflamed fat is activated.”

While they’re naturally looking for a drug solution to target this pathway, it would make sense to tap into it naturally by optimizing your body clock… There’s actually a clinical study underway at the University of Manchester in which they’re testing “body clock logic” to treat diabetes. According to the University:16

“Patients eat, sleep and take medication at times that fit with their body clock in a bid to control the disease. It’s hoped the study will demonstrate that strengthening our internal body clock by changing behavior can be used to treat a condition in a similar way to drugs and surgery.”

Sleeping Pills Can Have Serious Consequences

According to the statistics17 from the Centers for Disease Control and Prevention (CDC), between 50 and 70 million Americans suffer from sleep deprivation, and nearly nine million Americans take prescription sleeping pills in pursuit of good night’s rest; one in six adults with a diagnosed sleep disorder and one in eight adults with trouble sleeping report using sleeping pills. In 2011, sales of generic Ambien (zolpidem tartrate) amounted to a whopping $2.8 billion and Lunesta another $912 million.18

While most would not knowingly put their life on the line, you may be doing just that if you take sleeping pills… According to a study19 by the Substance Abuse and Mental Health Services Administration (SAMHSA), emergency room visits involving the sleep aid zolpidem nearly doubled between 2005 and 2010, reaching 42,274 visits in the year 2009-2010. Zolpidem is the active ingredient in sleep aids sold under brand names like Ambien, Ambien CR, Edluar, and Zolpimist. Polypharmacy—the use of multiple drugs—is part of the problem. In 57 percent of these overmedication cases, there were additional drugs involved:

Side effects associated with zolpidem include daytime drowsiness, dizziness, hallucinations, agitation, sleep-walking, and drowsiness while driving. It’s important to realize that narcotic pain relievers and anti-anxiety drugs or sedatives can cause a dangerous enhancement of a sleeping pill’s sedative effects. As noted by SAMHSA:20

“Overall, nearly half (47 percent) of zolpidem overmedication-related emergency department visits resulted in either a hospital admission or a transfer to another medical facility. About a quarter of these more serious cases involved admission to a critical or intensive care unit. ‘Sleep aid medications can benefit patients, but they must be carefully used and monitored,’ said SAMHSA Administrator Pamela S. Hyde. ‘Physicians and patients need to discuss the potential adverse reactions associated with any medication, and work together to prevent problems or quickly resolve any that may arise.’”

Studies submitted to the FDA have also revealed that blood levels of zolpidem above 50 ng/mL may impair your driving to a degree that increases the risk of an accident, especially among women. As a result, FDA recommended manufacturers cut the dosage of zolpidem from 10mg to 5mg for immediate-release products (Ambien, Edluar, and Zolpimist) and from 12.5 mg to 6.25 mg for extended-release products (Ambien CR).21 Sleeping pills have also been linked to a 35 percent increased cancer risk, along with a greatly increased risk of death from any cause.

Grave Risks for Drugs That Do Not Work…

These are serious risks for drugs that have repeatedly been shown to have little real-life value in terms of actually providing more or better sleep. An analysis of studies financed by the National Institutes of Health (NIH) found that sleeping pills like Ambien, Lunesta, and Sonata reduced the average time it takes you to go to sleep by just under 13 minutes compared with placebo, and increasing total sleep time by just over 11 minutes. However, the participants believed they had slept longer—up to an hour longer—when taking the pills.

This is thought to be due to a condition called anterograde amnesia, which prevents the proper formation of memories. When people wake up after taking sleeping pills, they may, in fact, simply forget that they’d been unable to sleep! Not surprisingly, sleeping pills are also associated with cognitive deficits the next day. Many sleeping pills are also potent anti-cholinergics, which suppress REM sleep and dreaming, and are known to increase dementia risk in seniors.

Helpful Tips to Improve Your Sleep

To get good sleep, you need to have properly aligned circadian rhythms, and to achieve that, you need to get daylight exposure, ideally around solar noon, for at least 30-60 minutes or more each day. Then, in the evening, you need to dim artificial light sources. In particular, you want to avoid the blue light wavelength. Research shows that exposure to bright room light before bedtime suppresses melatonin production in 99 percent of individuals. This can effectively rob you of sleep by preventing sleepiness.

Use blue-blocking light bulbs, dim your lights with dimmer switches and turn off unneeded lights, and if using a computer, install blue light-blocking software like f.lux.22 Also keep in mind that digital alarm clocks with blue light displays could have a detrimental effect. The following infographic, created by BigBrandBeds.co.uk, illustrates how your electronic gadgets wreak havoc on your sleep when used before bedtime.23 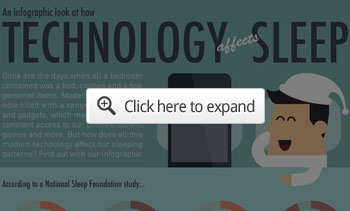 To optimize sleep, you also need to make sure you’re going to bed early enough, because if you have to get up at 6:30am, you’re just not going to get enough sleep if you go to bed after midnight. Fitness trackers such as the UP2424 can track both daytime body movement and sleep, allowing you to get a better picture of how much sleep you’re actually getting. Chances are, you’re getting at least 30 minutes less sleep than you think, as most people do not fall asleep as soon as their head hits the pillow. Besides maintaining a natural circadian rhythm, there are a number of additional ways to help improve your sleep if you’re still having trouble. Below are half a dozen of my top guidelines for promoting good sleep. For a comprehensive sleep guide, please see my article 33 Secrets to a Good Night’s Sleep.

Read my blog and the latest news and research on sleep